You may know her as triathlon age-group slayer Liz Cullen.  2x Ironman finisher.  Or perhaps you remember her from her ski bum days as a long-time Whistler local (let’s face it: she may live in Vancouver but I’m pretty sure her heart’s up here).

Some of you may know her as The Sarcastic Triathlete (if you don’t, it’s a refreshing read: go there).

I know her as a training partner/racing ass-kicker/co-adventure planner and good friend.

She’s currently incubating a human, so we won’t be running any races in matching shirts in the early season, but I have no doubt she’ll be back in action in no time.

She’s the first subject in what I hope to become a regular feature here: interviews with some of my favourite folks.

Herewith, I introduce to you Lizzie.

UBC Sprint tri in July 2003.  Because my mom was doing it so I thought I’d give it a try on her old bike.  I then did a random smattering of tris until 2006 when I actually started training for them.

2.     What was your most embarassing race moment?

Oliver Half Iron 2008.  I got a flat with 4km to go and decided to just ride it back to transition.  There was one final corner 400m before transition and I washed out and hit the curb with most of the town watching.  When I got up to head to transition my wheel wouldn’t turn so I had to jog in bare feet carrying my bike.

3.     Who is your biggest training/racing foe?

This tiny little cycling powerhouse named Christine, she sometimes goes by SMO.  Oh wait, that’s you.  Biggest foe and best training buddy all in one.  I have the swim, she has the bike and the run is getting close.  When we both start racing again it could get ugly.

Other than Kona. Wildflower.

5.     Best and worst part of training in Whistler/Vancouver?

Don’t really have one, but I do have rituals.  I tuck notes of encouragement in my race kit even if they don’t get read and end up a squishy blob.

How ’bout Heather Wurtele.  Because she seems really fun and nice and I like feeling short sometimes.

Not sure I have any (others may say differently)  I do like doing handstands in the water before races, might as well get a laugh in.

Other than the obvious of Tiger Woods, Lance Armstrong and Kobe Bryant, top of the list: Chrissie Wellington, Natasha Badmann, Lisa Bentley, and so on.

Whistler Half Marathon.  Although only in its 3rd year and overcoming course distance growing pains, it’s super neat to run through your own town with tons of supporters. 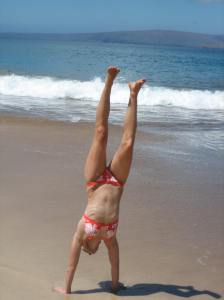 12.  Describe your athletic style/career in one sentence.

13.  Desribe that nightmare you have before racing (i.e. I show up without pants).

That I miss the race entirely usually because I got the day wrong and show up too late.  I actually did that once to an exam in university so it’s not beyond impossible.

Geez, what is this? A job interview?  I consider myself a perfectionist.  Ha kidding. According to me: humorous, uncomplicated, pregnant (for the next 2.5 months at least).

Ben and Jerry’s. Ok ok, probably Saucony.  You can never have too many bright fun shoes.

Thanks for taking the time, ‘Zard.

So friends: who shall be my next interviewee/victim?