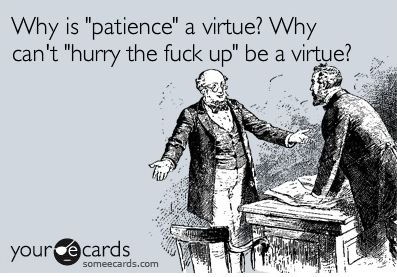 It’s been a while since I’ve posted, mainly because I’ve been mopey.  Nobody wants to hang around mopey, much less read about mopey.  So I’m trying to move past mopey into more hopeful.  Mopeful, maybe?

My body is nowhere near 100% fixed, as much as I like to pretend it is.  Watching the winter pass me by has been very frustrating – particularly not being able to ski.  I miss skiing and feel like I am missing out on a lot with the kidlets.

I’ve tried a few days of skate skiing without poles which was ok, but otherwise my workouts have been limited to the gym, pool running (ugh) and the wind trainer… endless hours on the wind trainer.  Actually, I’m pretty proud of myself for the workouts I’ve developed: they are based solely on TV characters.  When character A comes on, I spin 100 rpm.  When his enemy comes on, I spin 80 rpm, etc. etc.  It actually makes time fly.  As much as time can fly on a wind trainer at 5:30am.  Maybe I’ll trademark these workouts and become an infomercial superstar!  (Wait… do infomercials still exist?)

I celebrated 1 month post-op with a 1km run on the treadmill in the garage  – which I then had taken away from me by a well-meaning physio who told me to back off again.  I may or may not had shed tears of frustration.  Not having the ability to run daily has had a huge effect on my ability to manage my anxiety,  so for both my physical and mental health I’m hoping to get back at it sooner rather than later.

Baby steps, I suppose.  In the meantime, while I build my body back up, I’ll continue to lurk on race websites, read blogs, try to pick up a hobby,  follow people’s twitter updates and will the snow to melt and my body to heal so I can once again get out and play.

A few weeks ago, I was headed to the city to run some errands and let the boys know I’d be picking them up some tees and hoodies as they’d outgrown/destroyed the ones they had. Rory piped up that he “wanted a pink t-shirt with a skateboarder on it, but if they don’t have that, I’ll just get whatever”.

It’s interesting to me that at 6 years old, he’s pretty self-aware.  And so very, very different from his brother.

I bought Anja a new coat as she’d outgrown her current one (belly coats, anyone?)  She came downstairs, saw it and said “OH MINE GOODNESS!  It’s Beee-ooootiful”!

Completely unrelated to anything

I was at one of my recent 298374 doctors appointments waiting for the doc when I saw this:

I must have been having a bad day because it infuriated me.  I’m no feminist, but COME ON.  Set your daughter up with some slightly higher standards than “Diva”.  I hate that moniker applied to little girls – never mind newborns.  How about “Astronaut in Training” or “Athlete in Training” or “Average, healthy kid in training”?  Anything is better than Diva.

I gave up chocolate for Lent.  I’m not religious, nor have I ever given anything up for Lent.  I wonder what possessed me this year.  So far so good.  But The Chocolate Easter Bunny better watch his back March 31.  And his ears.  And tail.

It was the first warm and sunny day we’d had in a long time.  I spent a lot of it thinking about Mum.  She used to love early Spring days and would bundle up into her coats and blankets, drag an old chair to a sunny spot somewhere outside and read her book till the sun became shade.  I think that early spring days will always remind me of Mum and some of her ingrained habits.  I can’t believe that it’s already been 6 months without her.

I’m back at work!  Bring on the sitting, office snacks and the fluorescent lighting.  And hopefully more positive blog updates.

1 thought on “Wherein I ramble.”