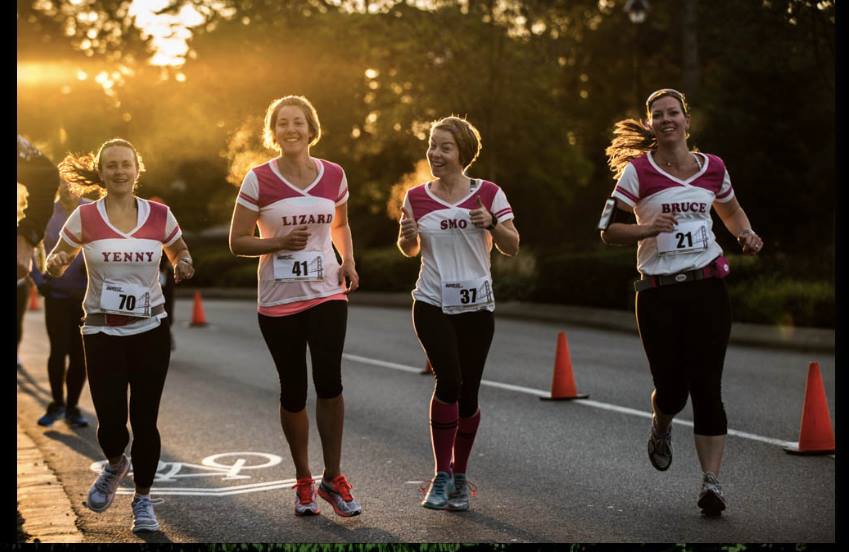 CITS, with a few honorary members, ran the Spirit of the Shore Half Marathon on Sunday.  I was going to write some big long race report but the reality is that Liz did a better job and mine can be summarized in bullet points and pictures.

When I set my sights on the Spirit of the Shore Half Marathon back in January, I knew that I needed a big goal. It’s not every day that you achieve a new PW, but I thought it was in me and I set out to do everything I could to reach it.  I’m happy to report that my new half marathon PW is 2:05, knocking my previous 1:58 from my very first half off the chart.

My last big training block for the race began mid July when I could finally run 3k without stopping and posted a new PW in a 5k on July 27th.  If 5k could take me 28:31, surely I could stretch that out to a half marathon by October.  Since that 5k I managed a few 9k, 12k, 15k and 18k all of which left me feeling like my insides might fall out and crawling back into bed for a few hours.  Truly optimal training.

I have my usual race pre-race routine, but to make big leaps sometimes you have to try something new.  I planned the ideal weekend to reach the starting line in the best condition I could.  Starting with Chinese food and beer for dinner.  Then a restful night of feeding Henry at 12:30am, 3am, 5am and finally waking at 6:37am for an optimal 20min frantic search for running tights and socks.  Breakfast is also so crucial and instead of packing in useful calories like most other races I thought the half bagel and a cup of coffee would really bring my performance up to snuff.

Like most halfs the first 5k were easy and fun.  The next 5k were still moving fairly quickly.  Then at 13k or so I looked at the pavement and it seemed to me to be soft and pillow-like and waiting for me to lie down on it.  I couldn’t believe how completely exhausted I felt.  If I had been running alone, I’m fairly certain I would have turned around and headed back to the car or at least the closest coffee bar.  Seeing as I was with super hot pink company and didn’t want to let the team down, I kept going.  Besides, the last half I started ended in my one and only DNF and that wasn’t the goal this time.  Things improved after I stopped to pee and didn’t have to concentrate on not being incontinent.  The last few k were actually better than the first few, but we had to be careful not to go too hard and end up with more than our 5min negative split else the goal wouldn’t have been met.

It’s like the running melted away.  After a shower, some food, a far too large bowl of frozen yogurt, I was back to my usual self and ready to do it again.

Now that I have a new PW, I’d like to keep it that way.  I’m sure there could be more down the road with more matching shirts and great company, but for now I think I’ll go back to getting faster again.  Just 4 months to take 30mins off my time. No problemo right?