2 years ago, when I ran the Vancouver First Half, I’d made a prediction to anyone who’d listen: I was either going to run a PR or I was going to explode trying.

That time, I succeeded.  I ran an 8 minute PR and was super happy with how the day had gone.

This year, I made a similar prediction – though this time, it was mostly to myself.  I wasn’t as confident in my fitness, but I figured it was worth a shot. 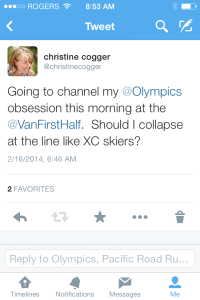 However, did you hear that loud BOOM right around 9:50 AM PST?

Well, that was me, blowing sky high just past the 15k mark.  One minute I was valiantly tethered to Liz’s butt and the next, Liz’s butt left me in the dust and my butt sat itself on the pavement.

Ah well.  You win some, you lose some.  Others you make it partway like you wanted to then stumble home for the rest.  Then you go for coffee.

Nevertheless, here’s some fun tidbits from the race.

– I didn’t quit.  Never before have I wanted to DNF from the word GO! like that before.  So I can say I won that mental battle.  You know when you know that it’s just not going to happen?  Yeah.

– It was sunny.  The weatherman had predicted this:

– My brothers and I were able to hang out for coffee at the finish line.  With wee Finn!

– I sat down on the road in the middle of a half-marathon.  Who does that?!  Me, apparently.

– I regret not wearing at least one earphone of music to distract me from my internal monologue which went something like this:

“Oh Canada, our home and native land…” (on repeat)

“Hey, it’s warmer in Sochi than it is here”.

“How in God’s name is that person in a puffy coat not dying?”

In the end, I finished, my time was ok and a few hours later, nothing hurt except for a blister.  All’s well that ends well, I suppose.  There’s some work to be done and rookie mistakes not to repeat.

I was granted a massive reality check that afternoon when I spent the afternoon in the hospital with a friend who’d undergone her 3rd knee replacement surgery in 6 years.  I’ll quit my whining henceforth.

Thanks to a snowstorm that shut the highway home till past my bedtime, I was able to spend Monday morning like this.